After Hurricane Sandy, the Army Corps of Engineers delineated the devastation on Long Island, saying “the dune and berm system along Fire Island is now depleted,” increasing “the potential for storm damage to shore and particularly back bay communities.”

As our first line of defense, it is important to bolster Fire Island, which hosts more than four million visitors a year and is home to New York’s only federally designated wilderness, with 17 communities of 4,500 houses nestled along its perimeter.

Mr. Young is among those who advocate abandoning the coast and allowing nature to take its course. Coastal engineers disagree with that approach.

Dr. Lawrence Swanson, a marine scientist at Stony Brook University, has said: The corps’ work “could significantly reduce the impact of waves and wave run-up on the mainland of Long Island. It will aid in providing an environment for marsh to survive, reducing velocities of storm-generated currents and thus lessening the impact of a storm.”

Mr. Young did not mention the acres that we designated as piping plover habitat and the 40 houses we are removing to put in place a 14-foot dune and an 8.5-foot berm that stretches 16 miles, exclusive of the far-reaching wilderness area.

Nature must be respected, but we cannot ignore our obligation to defend the homes of hundreds of thousands of residents and tens of billions of dollars in property. And for Suffolk County, that defense begins at our barrier beaches.

Please read the New York Times Article below and perhaps send in your comments too: 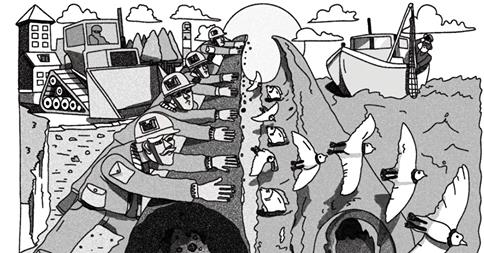 EARLIER this month, Gov. Andrew M. Cuomo announced a $207 million plan to dredge millions of tons of sand off the south shore of Long Island and spread it along the beaches and dunes. The Army Corps of Engineers, which will direct the federally financed project, says it will stabilize Fire Island and reduce the storm surge hazard for the mainland.

In fact, the project will do neither. It is a colossal waste of money and another consequence of the nation’s failure to develop a coherent plan to address the risks from storms faced by states along the eastern seaboard and gulf coast.

That failure was underscored in a report last month by the research arm of the National Academy of Sciences, which evaluated efforts by the Army Corps and other federal agencies to reduce those risks. The take-away from the National Research Council was alarming: There is no national plan to manage the coast. No plan for storm-damage reduction. No plan for how best to allocate federal funds. And no plan for how to respond to coastal hazards and rising sea levels over the long run.

This leaves governments reactive rather than proactive. Most money is provided only after a disaster occurs, and is to be used in the areas affected by that one storm. In some cases, government officials and politicians want to be seen doing something, anything, to protect valuable coastal properties. Unfortunately, science and reality have been ignored in the plan to rebuild storm-damaged beaches and dunes along 19 miles of Long Island’s South Shore, including Fire Island National Seashore.

Scientists from the United States Geological Survey have been studying the evolution of Fire Island for more than a decade. They have examined how the sediment moves, where it comes from, how the island’s shoreline changes and the way ocean waters move in front of and behind the island during storms. The results of these studies have been published in numerous peer-reviewed journals.

In its evaluation of the Army Corps’ draft Fire Island plan, the Geological Survey pointed out that the project’s justification and benefits were seriously flawed. The project will not reduce storm surge or storm hazards for properties across from Fire Island on the mainland, even though a significant portion of the cost justification for rebuilding the beaches and dunes came from protecting private property and infrastructure on the mainland. Why else would you spend so much to pump all that sand on the island?

The Army Corps’ environmental assessment made a broad assumption that Fire Island had been “damaged” by Hurricane Sandy and required repair and stabilization. But significant work over the years by coastal scientists at the Geological Survey has laid out a very clear picture of the long-term evolution of the island. Fire Island is a barrier island that does not require this project to “stabilize” it. The island and the national seashore have been relatively stable since colonial times.

Significant post-storm recovery of the island’s beaches has already occurred since Sandy. Natural reformation of the sand dunes will take longer, but nature is already repairing the island. Free of charge.

Lynda 25 days ago
Taxpayer funding for “beach dredge and fill” projects needs to go to beaches where all taxpayers are welcome. Those private/business…
Jon G 25 days ago
Anothet example of politics, beliefs, and job protection trumping planning and science. Global warming on a smaller scale in our…
new world 25 days ago
207 million to protect some 15000 homes. Comes to about $13000 per household. This happens about once every 10 years. Cost to fed gov =…
SEE ALL COMMENTS
Dredge-and-fill projects like this are not environmentally benign. The United States Fish and Wildlife Service warned that the plan, in the short term, would hurt fish and wildlife and their supporting ecosystems, and would have long-term consequences on habitat and the island itself.

Of particular concern to some scientists and environmentalists is the habitat for piping plovers. These birds are listed by the Fish and Wildlife Service as threatened nationally and endangered within the State of New York. Storms like Hurricane Sandy actually create fabulous habitat for these birds in the storm deposits that sweep across Fire Island. But the proposed dune building will interrupt the development of that habitat.

Fire Island National Seashore is a perfect example of a place where storm impacts should be viewed as a natural event. Storms are an important part of barrier island sustainability. The waters that wash over the island also pile sand on top of the barrier, adding to the overall elevation of the island itself. The Corps’ proposed dunes will block that process.

It is hard to understand why this project was allowed to move forward without a more detailed investigation in the form of an environmental impact statement. The Corps relied on old science or no science to build a case for the benefits. The scientific criticism provided by other agencies was overwhelming but went largely unaddressed. Instead, the Corps will bury a national seashore, a state park and a county park in sand under the illusion that some properties in low-lying areas on the mainland might gain a small bit of protection.

This is the new post-Sandy model. We now favor political expediency over science, and action over a thoughtful evaluation of its long-term consequences.